Everyone who matters agrees that Theresa May is certain to win a landslide victory of historic proportions in the general election on June 8. In fact, there is such overwhelming agreement on this point that it would be clearly in the national interest to skip the actual voting, thus saving much effort and money, and to declare Mrs May’s victory now.

Indeed, if Jeremy Corbyn didn’t dress so shabbily and hate Britain so much he would have conceded already. Handing over, say, two thirds of Labour’s seats to Mrs May would be an appropriately patriotic gesture at a time of healing such as this.

Needless to say, he has refused.

Perhaps, however, the following will reawaken Mr Corbyn’s dormant sense of patriotism.

I have obtained, via my contacts at Wikileaks, the FSB and the Trump administration, a copy of Mrs May’s victory speech for June 9, which was written just after the last time she said there would absolutely not be an election until 2020. 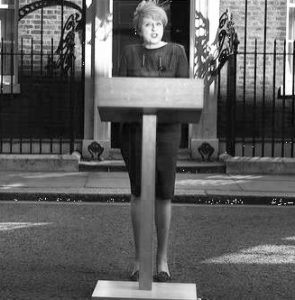 Her Majesty The Queen has asked me to form a new administration and I have accepted. Not that she had any choice. The people have spoken, or at least their newspapers have, and that’s that. It is, of course, the greatest honour that can come to any citizen in a democracy, or, indeed, in a country like Britain.

Last summer, the country voted to leave the European Union. I opposed leaving then, but now I want it really hard. This is not, as some who would sabotage our country have alleged, because I opportunistically do and say whatever I have to at any given moment. It is because Britain needed certainty, stability and strong leadership, and – let’s face it – Cameron was an upper-class metropolitan twat who probably has a holiday home in France.

Despite predictions of immediate financial and economic danger, since the referendum we have seen consumer confidence remain high, record numbers of jobs, and economic growth that has exceeded all expectations.

We have not, however, seen high homelessness, record numbers of zero-hours jobs, the housing crisis, the NHS crisis, the social care crisis, food banks, record private sector debt, the worst productivity in Europe or top-income growth that has exceeded all expectations. But that’s because we haven’t been looking. And neither should you.

Britain is leaving the European Union and there can be no turning back. Even though the EU says we can come back any time. Just imagine what Farage and the Mail would do to me.

And as we look to the future, the Government has the right plan for negotiating our new relationship with Europe.

Now, um, about these old friends and new partners…

The big one is Trump, obviously. And I know what you’re thinking. But I believe we can still achieve a great relationship – he said it would be ‘tremendous’, by the way, and who are we to disagree? – if we are simply prepared to give a little on some of our, frankly, old-fashioned British attitudes.

Such as having workers’ rights, or parental leave, or getting upset about people grabbing things when it’s just innocent locker-room fun, or refusing to spice up our bland food with delicious growth hormones, or having an NHS.

You’ll have noticed that Trump grabbed my hand, but he wouldn’t go near Merkel. I take that as a good sign, and so should you.

Anyway, because we have alienated twenty-seven of our nearest neighbours, we’re screwed if we don’t play along.

To that end, and in order to get the best deal for Britain, I shall be swotting up on White Nationalism and this alt right thing. And I shall be learning to play golf with Tiger Woods and Alice Cooper.

This is the right approach, and it is in the national interest. But the other political parties oppose it.

As for the other new partners, well, the less said the better, to be honest. Why do you think I picked Liam Fox to talk to them? There’s the Saudis, Kazakhstan, that awful man in the Philippines… Like I said, beggars can’t be choosers.

And that’s why, at this moment of enormous national significance, there should be unity here in Westminster, but instead there is still division. The country is coming together, but Westminster is not.

Before the election, Labour threatened to vote against the deal we reach with the European Union.

The Liberal Democrats said they wanted to grind the business of government to a standstill.

The Scottish National Party said they would vote against the legislation that formally repeals Britain’s membership of the European Union.

And unelected members of the House of Lords vowed to fight us every step of the way.

Our opponents believed that because the Government’s majority was so small, our resolve would weaken and that they could force us to change course.

They seem to think that voting should change things. But the people have already decided. And we’ve already had the only vote that matters – the referendum that made me Prime Minister.

The people didn’t ask for the election I called in April, and they are tired of division. So that is why it will be the last election to feature parties other than the Conservative Party. As I just said, we need unity in Westminster. And, God knows – in fact, He told me Himself – we’ve got more than enough divisions in the Tory Party, thank you very much.

And may I remind you that, now we’re out of the EU, we’re free to become a one-party state if we jolly well want to. Besides, from where I’m standing, it works pretty well for Xi, Putin and Trump. And it will do wonders for the Tory vote in Scotland.

I know full well the responsibilities that await me as I enter the door of No. 10 – the front door this time, mind you – and I’ll strive unceasingly to try to fulfill the trust and confidence that the Mail, the Telegraph and the Sun have placed in me and the things in which they believe.

And I would just like to remember some words of St. Nigel of Farage which I think are really just particularly apt at the moment.

And to all the British people – howsoever they voted – may I say this.

Now that the election is over, may we get together and strive to serve and strengthen the country of which we’re so proud to be a part.

And to weaken and undermine the continent of which we are so proud not to be a part.

And finally, one last thing: in the words of Melania Trump whom we bring here with us in our hearts, ‘There is now money to be made’.

And may God bless America. I mean Britain.